What is interactive digital signage?

Back when digital signage software first started, displays were based on cathode ray tube (CRT) monitors. These monitors were identical to your typical PC workstation. They were bulky, heavy and usually looked like ugly beige plastic boxes. They were also unable to detect touch without a special touch film. These were the early days of interactive applications. Back then, you would have encountered these monitors in interactive kiosks where they were used for in-store bridal registries or shopping mall directories. You would also encounter these kiosks in government offices and bank ATMs.

Interactive digital signage was born, but technology still had to catch up to really make the experience more meaningful. For starters, there weren’t many good content creation tools around and internet bandwidth was very low. Many kiosks still used modems to communicate with back-end systems, so they mostly performed very basic tasks like accessing information in a database or displaying simple graphics on a screen.

Early interactive kiosks also required big enclosures that needed to be ventilated because these old monitors and PC equipment generated a lot of heat. Fans needed to be installed with other equipment like large uninterruptible power supplies (UPS) and industrial power bars. In many cases, kiosks had to be attached to a wall or large pillars, so they wouldn’t topple over.

Even in the 90’s, installing a kiosk was a very complex and expensive affair. This explains why you would often find interactive kiosks totally disabled, or simply turned off. Due to the costs involved, updates were rarely done, and maintenance was an afterthought.

Back then, who would have ever conceived of thin, wall mounted flat panel displays, and high-speed wireless internet. It shows how far we have come in the past 20 years. 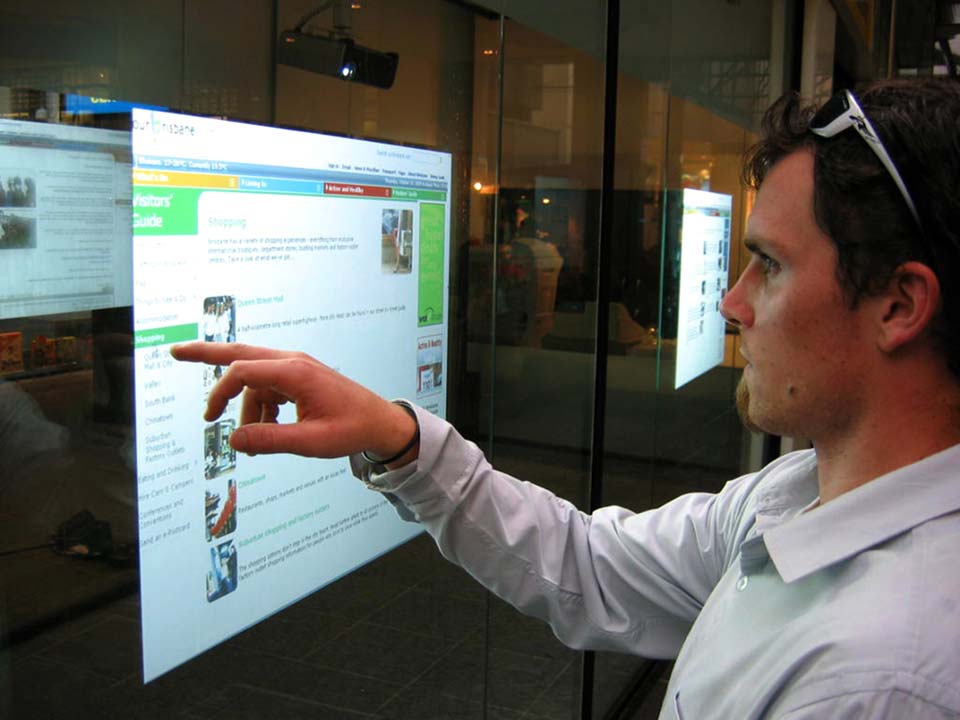 Technology is the big disruptor

Technological advances gave us cheap, reliable, high-quality hardware. Big, ugly monitors gave way to LED and LCD flat displays that can be hung on a wall. Even large and heavy PC enclosures have shrunk down to the size of a pack of gum. More recently, external PCs have been eliminated as we enter the age of the All-in-one system on chip (SoC) display. This means no more hanging wires or other

Not only can we touch screens, or even surfaces like a window or table, to interact with digital signage. We can also use voice and movement. This opens a world of new possibilities, and we’re just scratching the surface.

Modern smartphones have added a new wrinkle. Now, you can interact with digital signage in ways we never imagined. For example, you can use an app on your phone to change what’s playing on screen, or you can post social media messages in real-time.

Used to be interactive applications were relegated to information and wayfinding kiosks. Other than the odd e-commerce kiosk installation, there wasn’t much innovation in the field. However, modern interactive digital signage lets you take your content further, so you can create more memorable experiences.

This has already been used extensively in out-of-home advertising, and high-end retail applications.

Here are a few examples.

You can’t talk about interactive digital signage without mentioning wayfinding displays. The basic hardware components for modern wayfinding are easy to find and more affordable than ever. You essentially need a touch-enabled display with some type of PC or Android device to detect the interaction and deliver the appropriate content. The real secret here, is the content. Wayfinding can be anything from an interactive and searchable directory with a flat 2D map, to a 3D maps with videos walking you through your route.

With this level of information, how can anyone get lost?

A generation of people raised with modern technologies have very high expectations, and this is where interactive digital signage really delivers. Today’s wayfinding displays let audiences rotate a map in any direction, and zoom-in using common gestures. It’s like using any modern tablet or smartphone, but it won’t stop there.

Interactive digital signage benefits everyone. It can deliver useful information where needed, and engage audiences through gesture-based interactivity. While some of the technologies that empower interactive digital signage have evolved from the security industry (think facial recognition), others came from gaming (gesture recognition with Microsoft Kinect sensors), and the communication sectors (smartphone apps and social media).

The future of interactive digital signage looks very bright. The next level will bring integration with enhanced reality through some type of smart glass technology, or involve more smartphone integration.

Voice recognition and artificial intelligence will also play a growing role in interactive digital signage. There may be applications where viewers can have a more meaningful interaction through voice, and intelligent responses generated on-the-fly by a chat-bot or other smart assistant software.

These products could help automate visitor registrations, answer simple questions in a store environment, or simply assist people with certain disabilities. It’s important to note, most touch and motion based interactions can be replaced with verbal commands, assuming the intelligent assistant communicating with the audience can understand and respond in a meaningful way.

We’ve come a long way since those early CRT monitors with touch-films. With technology evolving and an ever-increasing pace, there are obviously many applications we haven’t even imagined yet.